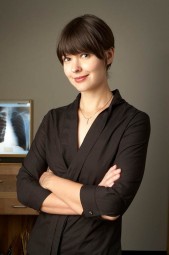 Dr. Jennifer Gardy is both a scientist and science communicator. By day, she is fulfilling her childhood dream of being Dustin Hoffman in “Outbreak”, working in the Communicable Disease Prevention and Control Services group at the British Columbia Centre for Disease Control.  As Senior Scientist, Molecular Epidemiology, Jennifer leads BCCDC’s Genome Research Laboratory, where genomics and genome sequencing are used to understand how outbreaks of infectious disease begin and spread. Her group was the first to use genome sequencing to reconstruct a large outbreak of tuberculosis, and she is continuing to apply this novel technique to other outbreak scenarios. She is also involved in other genomics-related research, including metagenomic surveys of human and environmental samples and the development of point-of-care devices for pathogen detection. By night (well, on days off work, really) Jennifer works in science communication. She’s hosted an 8-part science documentary series for CBC Television, multiple episodes of The Nature of Things, and is a regular guest host on Discovery Channel Canada’s flagship science newsmagazine, Daily Planet. She’s also blogged and written for the Globe and Mail, and runs a series of workshops on how to communicate science effectively. Jennifer completed her B.Sc. in Cell Biology and Genetics at the University of British Columbia (2000), and her PhD in Molecular Biology and Biochemistry at Simon Fraser University (2006).